Having difficulty finding enough relevant information on the internet, we reverted back to good traditional old books. I realise that it would have been the right thing to do my homework first and I'm probably doing everything wrong (I'm sure the experts would say) - planting the trees and then trying to gain some knowledge about the subject, but as everybody knows: when passion kicks in and the heart takes over, the mind and rational thinking takes second place :).

Gerry sourced most of the books on TradeMe, secondhand, and we bought one new from Capital Books in Wellington. They are:

All Kiwi and Aussie related, with some of them published by the CSIRO and others by local growers. This should keep my busy for a while, so excuse me while I go do some research. 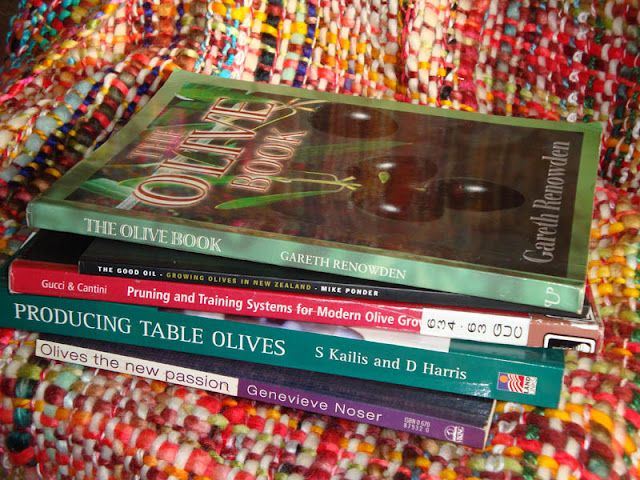 Oh oh oh! I am like a four year old on X-mas eve! So excited, I battle to hide the silly grin that seems to find it's place on my face whenever my mind wanders (almost 100% of the time) to our newest little babies.

The new batch of trees arrived this morning. The delivery guy met us at the Summerhill shopping centre, since he is driving the longest truck still legal on NZ roads :), and struggles to make tight turns and manoeuvre on narrow farmroads. No problem, we said, and shortly after seven, we starting to unload from Transflora onto Aokautere Fun Cargo!

The trees are probably about a year older than the ones we got from Plantgroup, but also a bit more expensive at around $9/tree. We ordered:

They delivered four Ascolano's extra - kind of them and we're very grateful.

The result of the larger trees was that we had to make two trips to get all the trees home. And while I was driving the first batch, Gerry was unloading and waiting for my return in the parking lot, probably looking like he was selling olive trees! :)

But they are beautiful little trees and we are so much closer to completing the planned grove. Still need to find some Kalamata, Sevillano and Picholine.

Olive trees apparently don't like wet feet. And while this might not be a problem higher up on our slope where the grove is (the soil around there seems to be beautiful no matter the time of year), there appears to be a soggy area lower down which could pose problems for the trees at the bottom.

With the turn of the season over the past couple of weeks, we are getting more and more rain and I figured it might be a good idea, sooner rather than later, to remove the carpets that we've placed around the trees in the first place to keep them from drying out during the drier summer months.

So off we went on a cold, windy, rainy, monday morning, to get on with it:

Okey, so we finalised the tree list, started to source suppliers and bought some trees.

Our trusty supplier (Plantgroup NZ, Hawkes Bay) who supplied the 100 baby Manzanillo trees last year, again came to the party. We ordered another set of 100 baby trees - this time 25 x Ascolano, 25 x J5 and 50 x SA Verdale. They charged us only $350 for the lot, delivery included! We've decided to expand on the supplier list a bit and some of the same varieties will be sourced from other nurseries.

Tharfield is another nursery who will supply a batch and Gerry also got a couple on TradeMe from a supplier in Napier. More on this later.

We're still searching for suppliers for Picholine, Sevillano and Kalamata to complete our grove.

Okey, okey, admittedly I got a bit carried away :). Certain olive trees don't like to be bundled up too much. High Density and Super High Density are not for all varieties. With the latter, the trees are planted as close as 1m apart with rows spaced as close as 1.5m from each other. Although this sounded very appealing, I had a good re-think of the situation. Do we want more trees that might produce less fruit due to lack of sun and air, or less trees that hopefully produce more fruit? And so we decided to go for less trees - it will be more manageable after all.

The most important thing for olive trees is that there should be good airflow, they need to be opened up and the sun should be able to reach every fruit at least for part of the day. Folklore says that you prune the olive tree until it is open enough for a bird to fly though it.

The trees in olive groves are often spaced quite far apart eg 7x7m and further, but this is mainly so that tractors and other machinery can manoeuvre through the groves during picking and pruning time. We're talking here about serious farmers having thousands of trees. Ours is really a small grove and due to the geography we have to do everything manually - mow the lawn with weed-eaters and walk to where you want to be in the grove. The land is too steep for mowers and the like.

Due to the fact that our land is quite hilly, the trees are automatically staggered vertically to be at least 30cm higher from the one tree to the next. This would presumably allow enough air and sun to come through which, I would think, should work well for high and super high density. However, scaling down a bit will still result in a semi-dence grove and I decided that 13 rows of 25 trees each should do the trick. So, instead of having 100 trees each of the remaining 3 main varieties (Ascolano, Kalamata and J5), we will now only have 75 of each. And the pollinators (Sevillano, Frantoio, Picholine) will also be reduced from 33 trees to 25 per row of each.

The SA Verdale is still a bit of a loose canon, and we're thinking of planting, apart from the 13th row of 25 trees in the paddock, another set on the pavement. This will almost become a fifth main variety, but with only 50 trees and not 75. Unless the Kalamata is ultimately scratched from the list, as would currently seem likely :-(, this would free up some space for more SA Verdale or something else. Kalamata, Sevillano and Picholine are unfortunately still open for change, due to a seeming lack of availability.

Lets hold thumbs!
Posted by Wouna at 5:48 PM No comments:

Deciding which olive varieties to go for is turning out to be the most difficult decision we've had to make in a very long time. Due to availability, or lack thereof!, our options are limited. And since we only have about an acre size area, careful planning is needed to make the most of the available space.

The easy part is we are not going into oil production, which already narrows down our options a bit. However, a number of the most popular table/pickling olives also seem to be tricky bastards. In some cases the fruit scars easily when picked, while others wrinkle when not cured correctly, and so it goes. Should this influence our choices at all?

And so we are drawing plans, and more plans. And with every round the varieties change. For instance, we've stumbled upon some South Australian Verdale, which was until recently an unlikely option, and adapted the plan again. Sevillano (Queen) olives might be a problem to find. So is Kalamata. Another potentially impossible variety is Picholine. But who knows. Maybe out of the blue a supplier might come along and our problems will be solved! If not, the plan will have to change again.

We measured the paddocks today and it turned out to be a funny shape - so we need to re-think the spacing of the trees. My original plan of 2m x 3m rows, will only work if we downsize and buy less trees. Mmm. Really need to think hard now.

Rumour (no theory!) has it that most olives are not self-fertile and therefore require "pollinators". This is normally just another variety olive tree. I initially thought it would be nice to have a couple of different varieties - just to keep my options open - not having all your chooks in one pen. But by pure accident (or luck!) this is generally seen as good practice. Most  researchers are now recommending that growers plant at least three olive varieties in close proximity in their groves to ensure some cross-pollination to improve fruit set.

According to one source some varieties are self-fertile (my understanding was that Manzanillo falls in this category, but have since read that they also like to "pair", namely with Sevillano). Other varieties are self sterile and most are somewhat self incompatible. Pollination can take place over a 40 metre distance, by means of wind, birds, bees etc.

Specific varieties are incompatible (!) - these include Barouni and Sevillano. Why don't they like each other? Another is Manzanillo and Mission. So Mission is out of the question, not that I've seen any commercially available in NZ. And Barouni as well, if we can find some Sevillano to help pollinate the Manzanillo.

All this means that we are re-thinking our options. The million dollar question still beckons.
Posted by Wouna at 6:49 PM No comments:

"The only difference between green olives and black olives is ripeness. Unripe olives are green, whereas fully ripe olives are black."
http://oliveoilsindia.com/Olive-Varieties.htm

Wouna
I can juggle and cannot play the banjo. Especially at the same time :).